Set to 8 classic rock and roll songs, this sexy and skilful new show sees Gandini return to their outdoor roots in a tribute to the mythical landscape of popular music. From Dylan’s stream of consciousness realms to the Velvet Underground’s troubling landscapes, from David Bowie’s soulful escapades to the rocking Rolling Stone’s anthemic joy de vivre, experience this accessible and unforgettable journey into the raw and elating power of rock and roll.
Commissioned by Without Walls, Ageas Salisbury International Arts Festival and Greenwich+Docklands International Festival 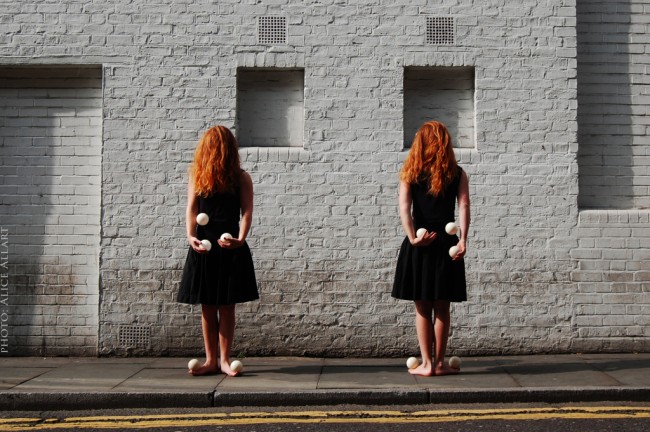 The one thing you can definitely say about Gandini Juggling is that they can juggle. They can juggle solo and within an ensemble and perform choreography. They can juggle and they enjoy to juggle and the audience on this beautifully warm day seem to enjoy their juggling too. And for the most part I enjoyed watching them juggle too. It is always a pleasure watching artists at work and particularly an ensemble who are clearly in tune with each other and, in this case, the art of juggling. The show opens with The Rolling Stones’ Sympathy For The Devil. The physical choreography involves some pop-art posturing reminiscent of Ready Steady Go and some contact improvisation. But it is the juggling, which involves some intricate and beautiful play with an ever changing number of balls, that sets this company apart – a beautiful and at times physically entangled knot of arms and bodies through which balls miraculously find the right hands with which to mate.The one handed juggling promenade to the Velvet Underground’s Sunday Morning, is full of light touches and possesses a simple intricacy that is mesmerising. The interpretation of the Beach Boys’ Good Vibrations is dashed full of colour and joire de vivre. Janis Joplin’s Summertime frames a virtuoso solo performance with a basketball that effortlessly balances all over the graceful performers anatomy and the three ball balance on the drum stick is pure class.

The sequence to Bob Dylan’s I Want You, was less successful for me. It wasn’t really a sequence but more of a tableaux. Perhaps I missed something but not much seemed to happen. One chap juggled whilst one performer, then another, lip-sync’d the song. Until this moment the show had been rich but it felt here that the company had run out of ideas. The rendition of Dylan’s Subterranean Homesick Blues in the form of a dapper Hispanic rap was a nice touch and may have had more of an impact had it not been preceded by the previous stillness. For me this Dylan medley lost its way and lacked the magic of the opening sequences.

The Bowie Scary Monsters was a return to form, again with some lovely ensemble flourishes that defied gravity and showed off some really imaginative ball play.

The final track however was a bit of a let down. Given some of the unity and stunning choral work at the beginning of the show this section was an ordered state of anarchy that shunned rather than embraced the potential aesthetic heights promised by the operatic soundtrack. For me at least some of the magic was lost. Rather than the rebellion I would have preferred a celebration with the same engery and vitality of the more successful moments of the show and ultimately I craved a powerful moment of beauty at the end.

The show is billed as being set to 8 classic rock and roll songs, an “unforgettable journey into the raw and elating power of rock and roll.” I am not quite sure if it is that, but for a lovely sunny afternoon in Greenwich it was a lot of fun.

Do you disagree? What did it mean for you?

I have to agree with Xavier in that this company can juggle.

There were some fantastic moments, I especially enjoyed the contact juggling and as with Xavier the moment of three balls on the drum stick.

However I have to disagree with Xavier and his critique of the Bob Dylan section. This moment to me showed everything that the rest of the show was missing. It was the only moment where the performers really committed to the lip-sync and made contact with the audience throughout. And I feel that if they had this commitment throughout the whole show it would have made the connection between the performers and the songs stronger.

The performers are consummate professionals and serious in their art. However, they looked it and for me, this became a barrier, as they did not make eye contact with the audience or give us any knowing glances, which I think would have helped us into the story and relate more to them. Again this is something that worked in the Bob Dylan section as they seemed to be knowingly serious and they had fun with that, especially as it was followed by the rap.

If the rest of the show had that level of commitment, fun and access for the audience it would created a more tangible relationship with us, which I think would have helped with Xavier’s issues with the show.

It was impressive to look at, sexy and skilled. For my taste, it just needed an injection of fun and openness for us to access it more.