Embark on a whistle-stop tour of a past era, in this tongue in cheek tribute to the legendary star partnership of Fred Astaire and Ginger Rogers. With lashings of exquisitely poised, glamorous dance storytelling, Lucy Bennett and David Toole pull out the stops, wittily referencing legendary scenes along the way. So get swinging and experience the classic power of dance! 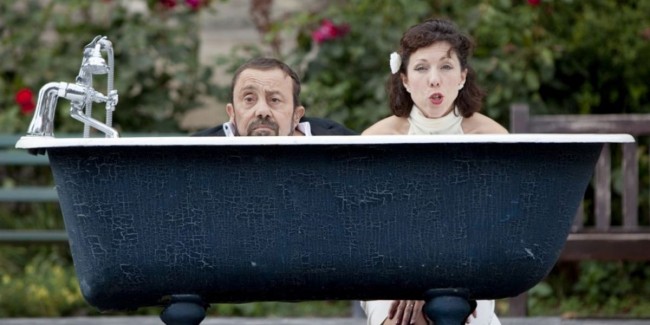 This show started with a burst of swing music and a bath tub. We then met two seemingly drunk clowns Bill and Bobby, possibly back from a big night out. They took us through classic swing music and a scene from a Fred and Ginger film. Seeing the bath reminded me of the old gag, I used to be a tap dancer…until I fell down the plug and this was the tone set. It was fun, charming and the dancing was fantastic.

Both of the performers are exquisite clowns presenting everything out to the audience with joy and commitment. I was with them and I loved them. The real meat of the show seemed to come from the fact that one performer had legs and the other did not. This came into its own during a section when they mimed a sequence from the Fred and Ginger film ‘Swing Time’. It culminated in the female performer repetitively miming to the male, “no one could teach you to dance in a million years” which after being deflated of course he could dance – magnificently.

The show has a lovely journey with lovable characters. The ill-fitting top hat and the colours gives a silent movie look which makes the piece recognisable to look at and immediately accessible. While watching these clowns move around a bath tub set outside, I could not help but think of the absurdity of Beckett with these two clowns not totally in control of the things going on around them but trying to enjoy them anyway.

I think what excites me most about this piece is that they bring together consummate dancing and spot on clowning so seamlessly, both supporting each other. We were able to enjoy the dance all the more as we loved the characters and wanted them to succeed. And when they did it was joyous. And the dancing informed the clowning as the structured and flowing movements help create character.

According to their website, they were intending to take us on a tour of a bygone era ‘when the performers did it for the audience’. They certainly did this show for the audience, pulling us in at any opportunity with looks and glances, moving between flayling around drunk and miming firm moments from the film. There is perhaps an opportunity to have take this motif further, playing with how far these different roles juxtapose.

I would have watched these performers do anything. They had a great handle on the form and the unassuming way they expressed this really was great.

I agree with Nick. Bill and Bobby is a charming work brimming with gorgeousness with two consummate performers at its heart, performers who are entirely at home with each other and, just as importantly, us. It’s always a joy to watch performers who are at the top of their game and generous enough to invite you into their experience. Both Bill and Bobby are excellent clowns, innocent whilst at the same time knowingly trapped within their circumstances and aware enough of the performance conceit to cast plenty of looks to the audience. And they danced with deft and precision!

It seemed to me that each sequence of the show has been put together with a sense of love, joy and genuine playfulness. These qualities are infectious. If there is a criticism it would be this – I could have watched these two for longer: a lot longer. I would loved them to indulge me on a longer, more meandering journey through their relationship.

I loved the play between Bobby’s long legs and Bill’s lack of them. This was humourously introduced and was teased out in an unconfrontational manner throughout the show. But it was their relationship that was the real icing on this theatrical cake. They balanced each other well, Bill’s Oliver Hardyesque ‘having been there so many times before’ tiredness and Bobby’s bright-eyed and childlike wonder were a magic mix. The choreography was inventive, always watchable and always inclusive for the audience. I wasn’t ready for it to end and would happily follow Bill and Bobby anywhere they might chose to take me.

Do you agree? How did the show touch you? What did you like? What would you like to see more of?