Three people find themselves abandoned on a deserted island. As they explore they gradually start to discover pieces of a vehicle buried in the sand, that can take them off the island. They work together to build the craft, only to discover that it won’t carry all of them. 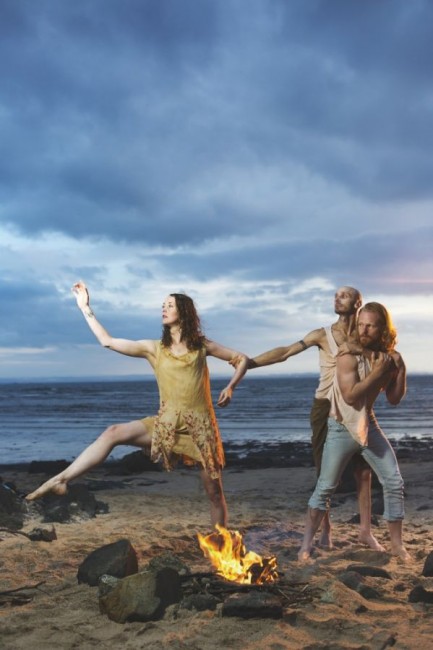 (I)land starts with a mound of sand. It is a remote desert island. Throughout the show we meet the three people stranded on it. We see their time on the island being played out through dance. They gradually find the parts of a vehicle, which will help them escape, however only two of them can get on it, leaving one…alone.

The dancing in this show was compelling to watch and at moments hypnotic. You could see the movements of the sea reflected in the movement. Watching it felt like the sea breeze blowing through my once glorious hair.

However while beguiled by the fluid movement, I found it hard to completely access the story. I was left wondering how the characters ended up on the island, how long they were there and how they felt about it. At one point it seemed like they were enjoying being on the Island, so why escape? I needed these questions dealt with before I could buy into the show.

I was slightly confused when the third person arrived, some way into the piece. The first was on the desert island right from the top, the second appeared from within the sand, which was a nice surprise, whereas she arrived from the sea. At one point I thought she might represent the sea itself, as she battled with the other men, taking their objects and throwing sand. But then she joined in helping build the machine.

Once they had put this vehicle together, two were chosen to escape on it and they left. There was no drama leading up to this action. It would have been great to see a change in dynamic as they fought as decide who would be the lucky ones to escape.

Overall my main issue with this piece is the story. Stories of people stranded on desert islands are familiar. This is really useful for outdoor work, as the audience will immediately be able to relate to the context and will not have to work hard at suspending disbelief. However I feel that the company could have found much more with this world. There was a lack of conflict, which ultimately shifted the idea from three people stranded to three people playing in the sand. If there was a choice for the characters to enjoy being on the island, why not push that and have characters really having fun?

I also found it difficult to stay with them their island world. When I saw the dancers walking on the sea (blue tarpaulin) it removed me from the world they were trying to create. The actual machine they created to escape was great – I enjoyed seeing it’s gradual construction and the performance trying desperately to save the pieces from being destroyed or taken. It was a nice make.

To sum up, the piece has some exquisite dance, the music was pleasant and the design was neat. However I think that the story could do with a bit of a redraft to add some more drama into the piece.

Like Nick I was a little lost with the story on this one. I would have liked to have known why the three characters were on the island. At the top of show there was one solitary performer sitting on top of the ship’s mast, who found some objects, investigated and moved with them. A character appeared from under the sand, which was a lovely touch – we had no idea he was there. As Nick says they both seem quite happy with each other, there was no ‘Lost’-like tensions or disputes of territory that one might normally associate with being lost on a tiny island in a vast ocean. It was all very easy and everyday.

I didn’t really understand why the woman in blue arrived from the sea. I guess she might have been the sea itself, or the wind. Certainly she wafted and she too was very easily absorbed into the existing group dynamics. Perhaps I was too affected by Lord Of The Flies as boy to ever believe that being deserted on an island could be so conflict-free.

As Nick pointed out, once they had built the machine there were no arguments over who was going to fly away. Or maybe these other two characters were simply figments of the first stranded sailor’s imagination – who knows. The choreography didn’t help to clarify the reality of the setting or any of the relationships. All in all this one left me feeling a tad empty.