Get ready to laugh, cry and cheer for these two beautiful idiots in an intimate, playful and hilarious award-winning show that combines music, acrobatics, humour and elegance. 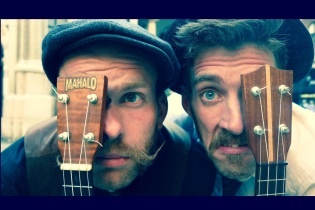 Barada Street is a ukulele playing comedy duo who perform some deceptively difficult acrobatics whilst singing and involving the audience at every turn of the show. Each element is pretty impressive and Richard and Uri pull it and tie it all together with real charm and virtuosity.

Richard, a tall gangly Englishman, is a great clown with a real knack for not simply coaxing individuals into the show but also holding the entire audience in the palm of his hand. I was very impressed with how he dealt with two women who nearly started a fight over one making a detrimental comment about the other’s daughter. It was uncomfortable, especially as they began their own grab for spectator love and could quite easily have got out of hand, but Richard steered it all expertly back on track and miraculously the two women even stayed to the end of the show. What followed was a delightful invisible juggling ball act with a young lad who struggled to control his laughter. It was delightful and a brilliant tonic to the fracas preceded it.

The first song was a ukulele duet between Uri and Richard. I enjoyed the little solo lick, which saw Richard getting into ever more daredevil lifts to perform them. This was great and really set the scene for the rest of the show. These two can perform some really difficult tricks yet the tricks play second fiddle to the comedy, the music and audience manipulation. Others might place the tricks at the centre of what they do but here they are secondary, even thought they are definitely not stuff you can try at home. Mind you, they do pull out a couple of adults and involve them in some of the lifting – a wonderful touch. It’s pretty daring to lift people not used to be being lifted, which could go so very horribly wrong for all involved!

As a tall person, it was gratifying to see the tall chap being twisted into all sorts of shapes, lengthways, upside down, sitting, standing, and the smaller chap doing all the base work. Usually it’s the other way round, with the smaller people who do the flying.

Richard and Uri sing and play well, hitting heart-warming harmonies, even when one of them was held aloft and the wrong way up. It all served to seduce their audience into their wonderfully playful innocent world so that when they began a rendition of Elvis’s classic “I can’t help falling in love with you,” everyone started singing without prompting, a lovely shared experience.

Richard and Uri perform well together, possessing the qualities that only great acts possess – a trust in each other, a tried and tested trust in the material and an ability to put their audience first, which, on a Sunday afternoon of a festival, is what it’s all about. Sweet, innocent, harmonious, peace making (lets not forget the incident at the top of the show that could have sunk a lesser performer), deft and at turns dangerous, Barada Street are class act who deserve the reputation they have earned.

Nick Cassenbaum
I agree with Xavier. This is a lovely show that does well to create an atmosphere where the audience want to play and join in. It is also great to see such skilled acrobatics executed effortlessly and fluidly without your big standard street theatre build up. The skill was palpable and the show was obviously very well rehearsed.

This is where my issue of the show sat – I felt at many points in the show the performers were just going through what they had rehearsed. I missed a sense of liveness, what I call ‘cog turning’ moments where we can see the performers thinking about what is next. Thinking about doing something and then doing it. These moments are important, they are the moments when we can access the performer’s mind-set and understand why they are doing what they are doing. Great clowns do this perfectly, we look at them and we can see they are thinking about doing something. Then they do it and it is hilarious. It makes us feel like it is all happening while we watch, for the first time. Here we are seeing these men doing one thing after the other. Although very skilful and funny, being more in the moment would have pushed the comedy that Xavier talks about.

I also did not really see any continuity between the costumes, characters and content. This could have been thought about more.

However this is a really fun show and the audience absolutely loved it. They created a wonderful atmosphere and everyone went away smiling.