The ‘Oss and the Ox

A colourful, outdoor family performance with live music, puppetry and dance, where the worlds of England and Brazil meet on the Streets.

The ‘Oss & The Ox features two colourful, larger-than-life figures: the Ox (Bumba meu Boi from Brazil) and  ‘Oss (the Hobby Horse from English folk ritual) in a processional performance, lead by a team of international performers with participation by local families. 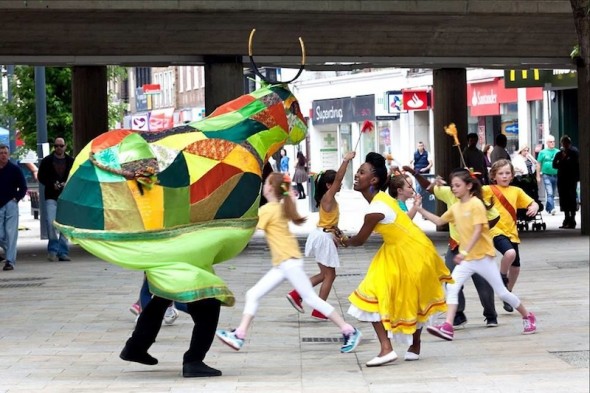 The Oss and the Ox begins with a parade marching through the town with an infections drum beat. I followed the beat, a group of children in yellow capes and an impressive colourful ox, harking from the Brazilian tradition. We finally reached the plaza where they were met with more drummers, musicians and a group of morris dancers with an Oss, which looks like a round table with a horses head and tail.

The two groups then interact with each other. Firstly trying to work each other out and then going into a dance battle, ending with both the Oss and the Ox dying but thankfully being resurrected with dancing and the audience cheering! Then the groups come to dance together in harmony and parade away from the audience.

This community dance piece had many great elements. The use of music in the parade was smart – as an audience we could not help but walk along with the beat. This allowed the audience to choose their role, observers or participants, in a very unintimidating way.

Some of the choices of cultural garb were effective as we only had to glance at some of the dancers to know their cultural identity, especially when the bells and hankies came out! In this kind of show it is important that we know what we are looking at immediately, so that we can sit back and get straight into the action.

The idea behind this show is lovely – that we can eventually get through our cultural differences and get on…but it won’t be easy. I do think however that the execution could be improved upon. There were elements that seemed a little too similar between the two groups, some of the dancing and the music could have been more contrasting to start with and then move into being harmonious.

Also some elements of the costumes confused me. The Brazilian ‘tribe’ seemed to be wearing English Easter hats…but maybe that was on purpose?

The narrative was very simple and as an audience we knew what was going on and what was going to happen. There was definitely more room for surprises to keep us guessing.

The best part of this show for me was watching all the participants. The smiles on the faces of the children dancing was utterly charming. And you can’t help enjoying it when a child turns and waves at their proud parents. The commitment by the community members in the band was also impressive. Putting on projects like these takes time, care with people giving up their spare time. It was lovely to see this group of people come together. It was also visible how much the professionals cared for the participants, making sure they were as much the stars of the show as them.

I do think in general the piece could have been more daring in it’s execution but this piece has a good heart and a warm message and it was lovely to see participants enjoying themselves.

I would agree with much of what Nick has said. The show, which is a cross between Mumma’s play, Morris Dance and Brazilian fiesta has a real child-like charm and simplicity. The style is friendly, folky and inclusive. The children, who seemed to be having a lovely time, give the show a charm, though it would be unfair to hand them all the credit. The South American band made up of parents and community members was tight and professional.

The story and style feel like we’ve seen it before, but not in a detrimental way. It is a lovely blend of tradition and community celebration. Perhaps Nick is right about some of the decisions but like he says, it is quite a task to knock a show together in no time with a bunch of people who have never worked together before. I very much enjoyed the way the adult performers worked with the kids, talking to them throughout piece. I did enjoy the blending of styles but most of all I fell for the celebratory quality of a community coming together.