Monotone Man lives in a monochrome world. He spends his time walking the straight and narrow, ticking boxes and avoiding unnecessary contact with strangers. In a world where we so often go out of our way to disconnect from the people around us, this explosive, interactive celebration of connection and colour comes to Greenwich Town centre.
Commissioned in association with Lyric Hammersmith,  Greenwich and Docklands International Festival,  Imagine Watford and Latitude Festival.  Produced in association with Lyric Hammersmith. 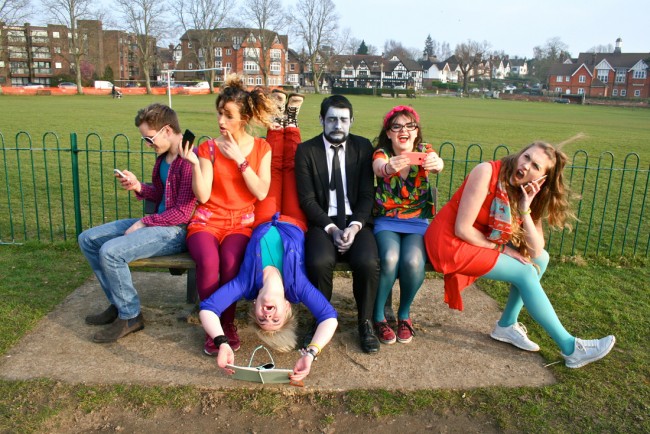 It is not often when watching a show that you are met with the performers giving you the provocation ‘make me smile’. This show by Human Zoo sees a group of clown-like people who look very similar to people you might share the tube with but with one major difference – they are all  painted grey…so actually they maybe not that dissimilar to the people of London. We meet them all demanding interaction from the audience which, undoubtably none of them really want. Then with the introduction of headphones they go into a world of choreographed, regimented individualism, all in their own world but living in the same boring grey universe.

Only with the splat of some yellow paint do they cheer up, interacting with each other and having contact with the world around them. This brings colour to the show with feather boas and new costumes, culminating in all the performers covered in colour and dancing.

The show seems to be about how we are all in our own world, only concerned about ourselves, not sharing or speaking to others, whether that is down to fear or selfishness. And only when we speak to or help others can we be happy.

There are some great moments that demonstrate this selfishness, including a fight with two suitcases (one which I have myself experienced) and a mobile phone dance. It mirrors life in individualist, post mobile phone London. However, as I looked at the audience all in colourful garb I couldn’t help wondering if it would be more interesting to do this show in the square mile. Then they would be challenging the audience to re think their habits.

The show felt somewhat distant at times as the newspaper-covered set was quite far from the audience and the performers missed opportunities to engage us more. They set up a good interaction with us at the beginning, with signs and then with headphone wires but after that they let us be. It would have been great to be used more in this show, to be sucked into the world and made to feel culpable to this atmosphere, instead of remaining voyeurs. This would have helped the ending, as the company tried to get people up to dance. If they had made us more used to playing with them, people may have jumped up to fight against the oppressive regime of mobile phones, rather than being dragged a little resistantly into the space.

The clown characters were good and I wanted to get to know them better. When they did come into the audience and got someone up, it was joyous. We were with them. If they had done this more, it would have supported moments when the action became a little repetitive, the chasing of one of the more reluctant members of the grey tribe for instance.

However the show did reveal to us the dull and sometimes selfish nature of London living, using synchronised movement and clowning. It demonstrated that there can be an escape to the drudgery, through being present and interacting with real people, I would have loved it if they had taken that idea and used it on us, the audience!

Xavier Leret
For my money the themes of the grey world versus the coloured one have been tossed upon the easel of life and Pollocked into shape. So Human Zoo have given themselves a lot of work to do – if you tread well worn boards you have to do so with the sort of super originality that a Pixar Improbable might summon.
This is a young company, but they need to ask themselves some questions about why it is they make work, what it is they wish to explore and what they wish to give to the audience. These are the questions we have to keep asking ourselves. Of course there are no right answers to this, but for me these are the important existential starting points and I’m not clear where they stand.
For me too much of the action was set in the distance on the monochrome rostra which was positioned was quite far away from us. I kept wanting to be touched, to connect with the characters, their likeability and humanity. There were elements of clown but never the mess, nor the naivety, or complexity which brings me back to the humanity. Ultimately this is a piece which broils in that colourless existence that we all fear.
I would like to see this company exploring in greater detail the depths and dimensions of this monochrome world.
Do you agree? What do you think?
Have your say!