Two audience members take part in this collaborative audio experience while the rest of the audience watches, shifting the balance between performer and audience and asking participants to become the watched.
Presented by Greenwich Dance 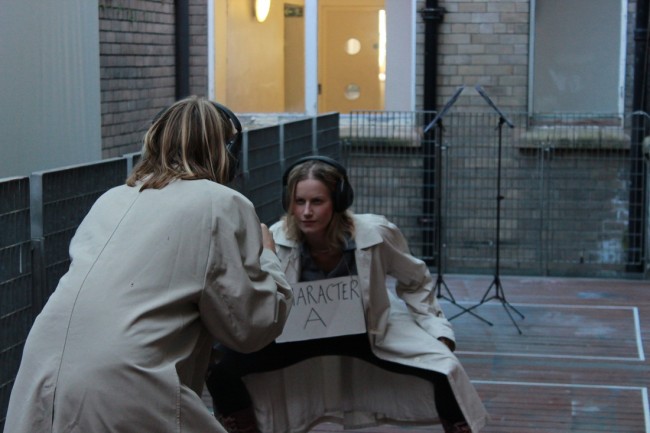 This show invites two members of the audience to perform. The premise is that you are the stand-ins for a piece of theatre. You are asked to sign a contract stating you will try your best, trust your partner and go for it performance wise.

You and your partner put on rain mac and head phones and then the tasks begin, each with a caveat of you can push yourself as much or as little as you want to. The tasks include a boxing match, a dance and it culminates in a shoot out.

As a performer in this piece I felt encouraged and looked after by the voice on the headphones. Also knowing I was up there with someone who was also doing it for the first time allowed me to relax in such a public presentation. I also got to hug Xavier, which was nice, who looked good in his ill fitting mac.

The tasks were recognisable, fun to do and the set up was well created by the two facilitators, although there were points where I felt they did not earn our trust enough to ask us to do the more ambitious actions. More could have been done to get us in the right frame of mind to let ourselves really go. The signing of the caveat form was good but this could have been taken further to prepare us to what was about to follow.

My main question for this show is how interesting is it for an audience? It was a good experience for us as aprticipants but looking out to an audience of between 2 and 5 in a festival that was getting hundreds of people per show begs the question what could have been done to let the audience in more. If the audience were informed of the process a bit more they may have been more interested in what was going on in the performance space. Perhaps if there was a sound track to the show, it would have created more of a spectacle beyond two men in macs moving about.

The other question is why is it in a public space? If the show is not ostensibly for an audience but is about getting people to push themselves and do something with someone they have not done before, would it not be suited to the safe confines of a theatre or an exhibition space where the volunteer performers would be in a less exposed context?

As I said, it is set up well and fun but even I as a street performer found it intimidating to follow the commands in a public space and I held back…but maybe I am just shy.

At the end of the show we received notes, which is a really lovely touch, even if I only got ‘good work’ and Xavier got ‘great’.

It’s a really interesting and fun idea which I feel, with a bit of adjusting in the execution, could see members of the public really pushing themselves.

I think I would echo Nicks thoughts. Having watched the show before taking part, the audience experience in no way matched the performing of it. Visually there isn’t much going on. The actions that are performed are not exactly dynamic. In the performance I saw, one performer was a clearly a performer and was at home, the other appeared extremely uncomfortable. This could have been interesting yet there was no attempt to follow this through. There was no story, the action of the piece lacked direction.Performing the show was entirely different experience, although it would have been nice to have looked out to see more and more people watching, not the five that we had dwindle to the one who turned out to be Nick’s friend anyway. Of course some of this might be because Nick and I weren’t great together, that little magic you need for soufflé decidedly missing – but not all of it. Often it felt that we were standing and reading instructions more than we were doing anything. What we were asked to do came in short snippets and seemed arbitrary. I would have been quite happy to have been taken on a journey and surrender more to the whole experience.

To go back to Nick’s point about audience, that really is the crux of all this. If a piece is presented to an audience then it needs to do more for them. That said I enjoyed the performing of it. I felt that I could trust the company, humiliation is not the name of the game here. And yes the director’s notes were a nice touch. It just could have been so much more..