Leading the way in stylish and energetic dance theatre, Southpaw Dance Company present Carousel, a visually spectacular tale of a fairground after dark.
Performed on and around a fully functioning merry-go-round, the dancers flip, roll and dive on their spinning carousel to Balkan and Gypsy-influenced music. As twilight descends before the performance, our very own hidden fairground will come to life in Winchester’s Bus Station to set the scene for this heart-pounding finale event.
Fairground opens 19:45 at Winchester Bus Station.
Commissioned by Without Walls and Stockton International Riverside Festival 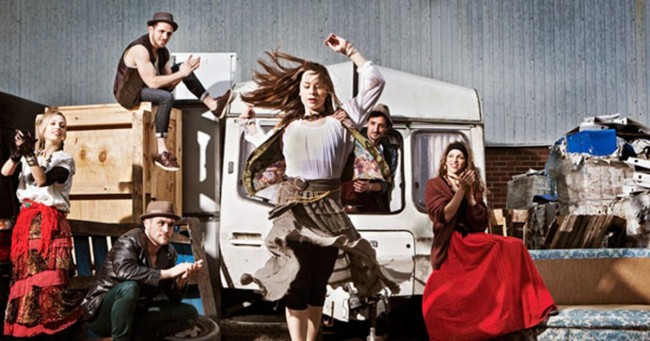 This show happened the moment you walked under the sign saying ‘Carousel’. We had left Winchester and arrived into a world of roaming musicians and fair ground games. At the centre of it all is the carousel. Even before the show started we were absorbed, then with an introduction of Balkan music we were there.

The show begins with a woman sweeping the stage and the carousel coming alive. It is a whimsical start which is soon interrupted with a burst of high octane Balkan music and the arrival of the ensemble. With a cast of three young women and four young men, they all pair off leaving one alone. The focus is the cleaner and her partner. We see their relationship start, the courting period and all the way to the engagement celebration. The story soon turns sour as the man left alone gets drunk and kills the cleaner in a jealous rage – but don’t worry the magic carousel moves time back to bring her back to life.

All of this is told through dance. And the dance is wonderful. It is bold, dangerous and sexy. It feels like a mix of ‘West Side Story’ and ‘Fiddler on the Roof’, which is no bad combination. The dance allows the story to be told quickly and effectively, helped by the concept that the carousel moves time on. There are some beautiful moments, in particular the first dance between the cleaner and her partner. This moment was so tender that when the couple did finally kiss the audience cheered, a sign that they had us completely captivated and involved.

The performance style felt like it was from another time, especially during the courting period. For this they transformed the space with a white sheet hanging from the carousel, allowing us to have two scenes at the same time. Snapshots of the men smelling their breaths against a hand. Women getting ready only to scream when the man popped his head round. It was all very innocent and at times cheesy but the fact it was so familiar and recognisable moved the story along at a fast pace. We did not have to think about it too much. We could just enjoy the journey.

This clean cut romantic story is a perfect set up for the drama. In a drunken jealous rage the single man ends up stabbing the cleaner. The audience gasps. This shock moment is down to excellent dramaturgy. We are relaxed and moved by the love story and the performance style, so we do not expect such a thing to happen. My only comment here, and it is small one, is that the knife is quite small and I think he could have made it more obvious to the audience that he was holding it before stabbing.

All credit to this show, it is more of roller coaster than a carousel. The dancing is exquisite, the story is engrossing and you can not help but love the ensemble. It all works together to create an all encompassing world that we loved to be a part of.

Did I mention the dancing was fantastic?

Because it really really was.

Right from the moment you enter their space and you are greeted at the gates by a man on stilts, you are transported into another time. There are fairground attractions, a wandering band, a coconut shy, a hastily created ensemble of audience members performing a machine. Surrounded as we were by the red bricked Victorian tenements it was easy to leave the outside world behind and allow something truly magical to steal us away. All these elements in themselves were lovely. There was such a warm and friendly atmosphere but it is the dance show at the centre of it all that is the real class act and the element that sets this company apart.

When the ensemble burst onto the stage the energy is incredible, the choreography exudes power and sexual virility as the dancers display their cheeky athleticism, the men dancing with brushes, the girls with buckets splashing the front row of the audience with water. The spinning carousel is used to great effect with dancers spinning on the poles, running on the spot. Crickey one of them ran on the spot on his hands!

It is not just in the ensemble set pieces that South Paw shine, the duet between the two lovers was intimate and detailed and so touchingly played. And the solo dance of the mourning lover in which he fell and threw himself through convulsions into agonised contortions and flips with no regard, it seemed, for his own welfare was intensely moving. There is no loose-end in this show. The ensemble of dancers, without exception, are extraordinary. So too is the choreography, the use of space and the storytelling, which is clear and always spectacular. At the heart of Carousel is a simple love story that is by turns exciting, poignant and a genuine tear jerker. It is one of those rare moments in theatre that reminds you that life is worth living.