We all know at least one thing that no-one else knows. This is your chance to share it as Slung Low invites you into The Knowledge Emporium to celebrate the knowledge that makes you unique.
The Knowledge Emporium is an old-fashioned sweetshop in a converted 1960’s airstream caravan, which will be taking up residence outside The Discovery Centre in Winchester during the week before Hat Fair. However, this is a sweetshop with one big difference: it doesn’t take money. It trades only in knowledge – your stories, your recipes, anecdotes or facts in exchange for sweets.
Over the Hat Fair weekend, The Emporium will move to the Great Hall (lower) where Slung Low will create performed events from the material collected, celebrating the collective knowledge of the community. 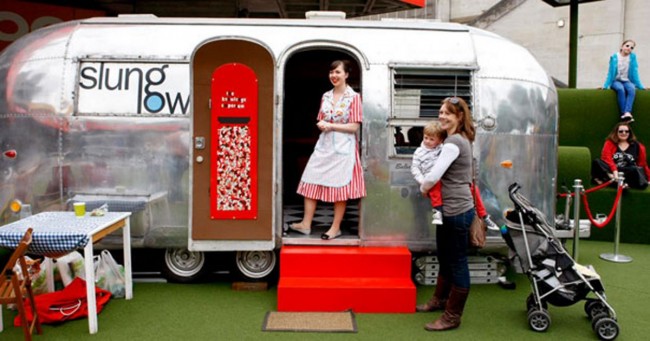 A lovely little installation based around the simple conceit of trading facts for sweets – yes you heard that right, you can swap facts for sweets and I don’t just mean a single gum drop. I mean a whole cinema size pick-n-mix! The emporium, a small retro caravan, is tucked away in a small square off the High Street, a delightful silver hideaway dwarfed by the official court buildings that gleams through the gloom of officialdom. We were greeted by two confectioners, clad in red and white stripes like sticks of Victorian seaside rock and invited in to sit around a table to add our important fact to the book. These facts, we were told, are to be collected for later in the day when our two hosts interpret them into a small improvised show.

The two hosts are extremely personable and the conversation flowed, so much so that I could have sat there for a good while longer but unfortunately there were more stories arriving by the minute and my seat was needed. The caravan smelt like a fairytale sweet shop and the smiling hosts added to the whole inter-dimensional Chitty Chitty Bang Bang ambience, complete with Dick Van Dyke pearly white Broadway smiles. The world outside dissolved – which is no mean feat considering the road works grinding and drilling away just across the square (someone should have a word with the council about that). The show works for all ages, though if you have younger kids be prepared to help your child come up with something for the book. The two hosts won’t do that, which is a slight flaw to the experience. It might have been good to have been taken on more of a journey, perhaps the two hosts could be more characterful, rather than a couple of nice chaps in colourful uniforms. I know there will be a show of the stories a little later today, yet whilst in the caravan I think it might have been a nice touch to have our hosts favourite examples picked from the book for us and even a taster of what might be coming in the afternoon’s performance. For the younger members of the audience this really would have been a nice touch. Certainly the young chap that followed us was a little bemused and it was left up to his dad to chivvy him along, which struck me as a missed opportunity – not least as it could help to lure them back for the show, as well as adding an extra touch of magic for those younger participants.

I enjoyed sifting through the book of knowledge. Some had contributed a sentence, whereas as others had shared entire short stories. I am looking forward to seeing how the day’s collection of facts will form themselves into performance. All in all, it’s a lovely way to spend a few minutes and the giveaway sweets are a great touch, especially as it is a proper big bag.

I have to agree with Xavier, the aesthetic of the installation was lovely and the exchange of giving a story, fact or gag for a sweet is worthwhile. It offers much more of a tangible swap for our information than many other pieces I have seen, which take your tit bit then leave you with nothing, other than the knowledge you have helped their show. This is a genuine trade which leaves you with a sweet taste in your mouth.

The real excitement for me came from learning more about the people I was with. It started new conversations and revealed things which may have never come out had we not been asked to write something in this big book. I do also agree with Xavier with his point about the characters. I think more could be done to get us excited about the process of giving stories and getting the sweets. If we saw these two vendors getting extreme satisfaction from their jobs and really wanting our fact, I may have been tempted to dig deeper rather than jotting down the first thing that came to my head. But maybe that is down to the context of the festival environment. They can rest on the idea that the audience members will be expecting this sort of thing, so don’t really have to try that hard.

The setting is wonderful and the conceit was clear. A little more clarity of what was going to happen with the info and an increased theatricalisation surrounding the task would have made us feel like we were in an entirely different world and made us more committed to the task.

What do you think?