Not everything is as it seems with Smoke. A well-dressed gentleman gives a gently comic and understated physical performance as he acknowledges, with weary resignation, a wisp of smoke creeping out of his trouser leg… and then his collar… then his sleeves… and what starts as a wisp ends up as an inevitable billow. Commissioned by Without Walls and Hat Fair 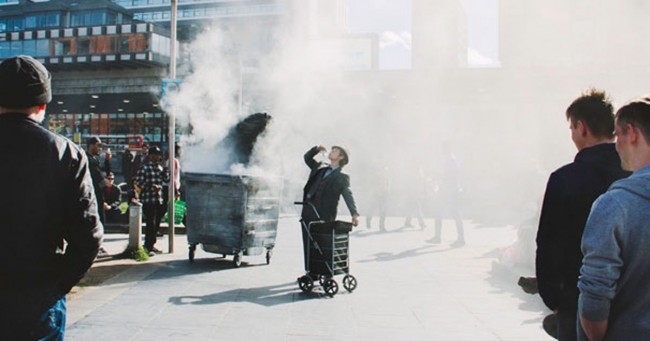 A clown in a soot-stained suit strolls the streets with his trolley, spewing smoke in his wake. The smoke seeps from out the bottoms of his trousers, his sleeves and his shopping trolley. His face is blow dried grey, his hands in manicured distress. Smoke is a really charming piece especially when our clown takes a seat and invites a kid to help him to open his flask and then to crack a nut – that kid walked off happy.

There were lots of lovely, detailed touches – pulling out a slice of bread from a bag to put it in his smoking shopping trolley to then produce a slice of toast, or leaving a kid standing awkwardly whilst he produced a tape measure from a pocket in order to measure himself, which of course produced its own series of mishaps, before he persuaded the kid to tie his shoelaces whilst he patted him on the back. The spell was slightly broken for me when it became obvious that kid was a plant, when he ‘performed’ missing the little black box with the hammer. It was a bit of a shame because up until that moment I believed that I was watching a master of improvisation – which in other bits, like the nut cracking sequence, he clearly was, or the moment he was given a bottle of beer from a couple of guys who just happened to be standing about with a case of beer. The end was simple and lovely. A piece of coal was plucked from the shopping trolley and placed in a dumpster, which of course began to smoke. There was music that built until the dumpster magically opened and our hero went to investigate and with the help of his plant vanished mysteriously from view only to be wheeled away by a bin man in health and safety orange.

I enjoyed the understated nature of the work. The clowning was innocent and playful. I did feel he struggled at first to maintain an audience and when he asked for a quick ‘one, two, three,’ it fell a little flat. I think at this point in the show audience were leaving, perhaps there wasn’t quite enough to keep their attention especially as a little further down the high street there was a much louder show vying for attention. However by the end of the show a good size crowd had gathered. The plant could have been used more effectively, perhaps with some slightly more goofy extended sequences, especially in the moments before it became clear what was going on. Even so, Mr Smoke (I’m not quite sure what to call him) is a consummate and highly watchable clown who, when he has his audience, he has them eating out of the palm of his hand.

Whilst standing with Xavier in the crowd I heard an audience member say “how intriguing”. This is what this show’s strength is in for me. As Xavier said the understated performer is fantastic and really has the audience with him. He is doddering and sweet. The intrigue comes from the fact that this character seems familiar but ultimately other worldly. Whilst watching him I felt I was watching a man who is from another place and yet so comfortable to be in our world with his moving trolley and smoking suit that it was not intimidating but inviting. Not bound by the pressures or preconceptions of our world, he is able to interact with audiences and remove their inhibitions. This was demonstrated by him only needing to give a slight movement to get some young audience members to do anything. At one point in the show he got out a photo album of past holidays. This was a nice moment, with him looking at his past life, which gives him context when he begins to walk towards the bin for his untimely end. I do think that the ending could be more moving. Perhaps some more of his memories could be shared to enable us to connect with him? But then I’m not sure if that’s exactly what the performer would have wanted. As Xavier says, he gets pushed away in the bin and I did feel a little short changed as I would have loved to give him a proper round of applause to let him know how much I appreciated his work.