In this première of their new show, Wet Picnic examines the role the internet and technology has in our everyday life. We all exist somewhere online, whether we know it or not. We all have baggage; what happens when the internet displays it for everyone to see? Suitcases exposes the disconnection created by our addiction to technology, performed in Wet Picnic’s trademark bouffant style.
Co-commissioned by Hat Fair. 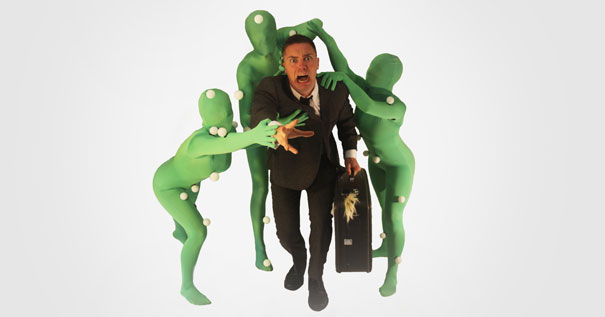 The show begins with a blast of lift music and three happy hosts wheeling in piles of suitcases to get us into place. We are told we are about to see ‘The internet live’. They tell us they want to make a connection with us, which they literally do by shaking our hands and chatting to us. We learn quite quickly that all these smiles are to hide a more sinister side to the internet. We are given cookies which we are told will track us. We also hear the T&Cs in which our children could get taken away. A member of the audience is brought on stage, which we learn is a plant and subsequently has his life ruined because of a mistaken comment where he suggests killing all cats. This journey is portrayed through dance, visual gags and audience interaction.

The moment in the show which really works is the introduction of David, the man who we think is an audience member. He says he is not internet connected in anyway and the staged annoyance and disbelief of this from the hosts is presented in such a way we all think it is improvisation. This is so convincing that when I did find out he was a plant and he started dancing I thought, ‘God he can dance well’. This technique made me care about this character. I sympathised with him. His comments lead to death threats, violence, his girlfriend leaving him and his mum winding him up. I really cared, more than I would if I knew he was an actor from the start. I felt like he was one of us, which did bring home the point – that it is very easy to have something you say online be taken out of context.

While the opening and the bringing up of David was very strong, I found that much of the show was not on the same par. Some of the visual gags were smart and I did enjoy the moment with giant twitter birds. However some of the dance routines seemed slightly wedged in. Although the high octane performances did make these moments charming and fun to watch, I would think about how important they are within the structure. The ending was slightly disappointing. David is welcomed into the world of the internet but we were not sure if the piece had actually ended. They opened up with such a strong world it would have been lovely to be able to say good bye to this world properly – maybe with the return of the lift music, possibly with David having a sinister smile ready to welcome the next poor soul into the internet.

I did admire the choice of topic. I have not seen a street show try to tackle the internet before and thought that the twee aesthetic did well to highlight the underlying sinister nature. However I think more hints of life in a suitcase could be plotted amongst the show to make the final metaphor clearer.

Suitcases has a real charm about it, although it doesn’t quite re-reach the introduction of David moment – which is a fabulous coup de theatre and did completely take me by surprise. I really had no idea he was a plant. So utterly fooled was I by the Green Meanie’s slow death for having chosen the one person in the audience with absolutely nothing to share, that I was up for following this ensemble’s journey not just into web hell but anywhere. Sadly nothing else in the show was quite as clever as this and much of the currency earned slowly dwindled over the next half hour – though not entirely. The dance sequences were amusing and performed with real gusto and when they pulled a real audience member out, they handled this well, incorporating ‘David’s Wife’ into a series of vignettes all to be posted online. The end happened without it really being an end, or at least I wasn’t sure that it was an end which left me with “Oh was that it?”

I’m not entirely sure who Suitcases was aimed at, though I suspect it wasn’t the front row of three, four and five year olds. There were enough mad antics to keep their attention though I suspect many of the finer nuances of the shows themes were lost on them. That in itself is not necessarily a bad thing. There are plenty of examples of shows that appeal to young kids whilst also throwing adult snacks to their parents – except that I’m not quite sure there was enough for the parents to get their teeth into, a least not in the second half of the show which seemed to jump from one wacky dance to another, without contributing much more to the show’s development. I certainly lost interest. All that said, pulling David out of the audience was a moment of pure genius and one that I won’t forget. This was the first outing for the show and I would be very interested to see how it grows and develops with each outing.